So, you may be wondering what making lemonade has to do with the dining room makeover. Stick with me here for a minute and it will make sense. Remember that SUV full of IKEA boxes I shared on Instagram?  Well, some of them were a floating BESTA system that we were going to set up as a console table in our entry way. We were SO excited to finally be working on the entry. We even bought two chairs to stain, one for each side of the console. Imagine my horror when Corey opened the first box and said the wood was lighter than he remembered. I took one look and knew it was wrong! Normally, this would just be an inconvenience and we’d go switch out the boxes and go about our day. Except that IKEA is just over FOUR HOURS away!

He wasn’t so convinced that was the best idea 🙂 So I schemed and planned and schemed some more. Looking at the calendar, it was going to be mid-July before we could get back to do the exchange. And I’m just not that patient. Instead, I started carrying a piece of the cabinet around the house. After a few tries, I ended up in the dining room. If I tilted my head, and squinted my eyes just right I could envision the BESTA cabinet working as a side table in the dining room!

There you have it. I took my lemon of bringing the wrong cabinet home into the lemonade of doing a mini-makeover of the dining room! We choose to leave the upper shelf open instead of installing the drawer units that we bought when it was going to be an entry table, but that was the only adjustment we needed.

Now that you’ve read the long-winded back story, it’s time for the fun part!

Here is a before shot from Christmas. The bones of the room were great, it was just a little boring. The stand on the left was just there for Christmas because we needed somewhere for the nativity scene. And the giant poinsettia was just there because I won it at a Christmas party 🙂 The rest of the time both corners were empty. 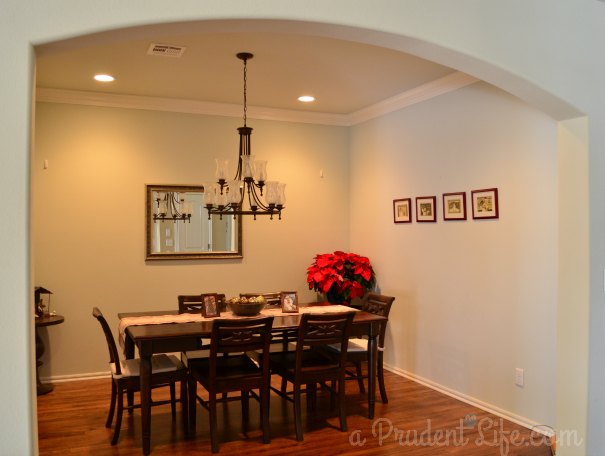 Here are the after shots! I’ll add a source list at the bottom so you can just enjoy the pictures for a moment! 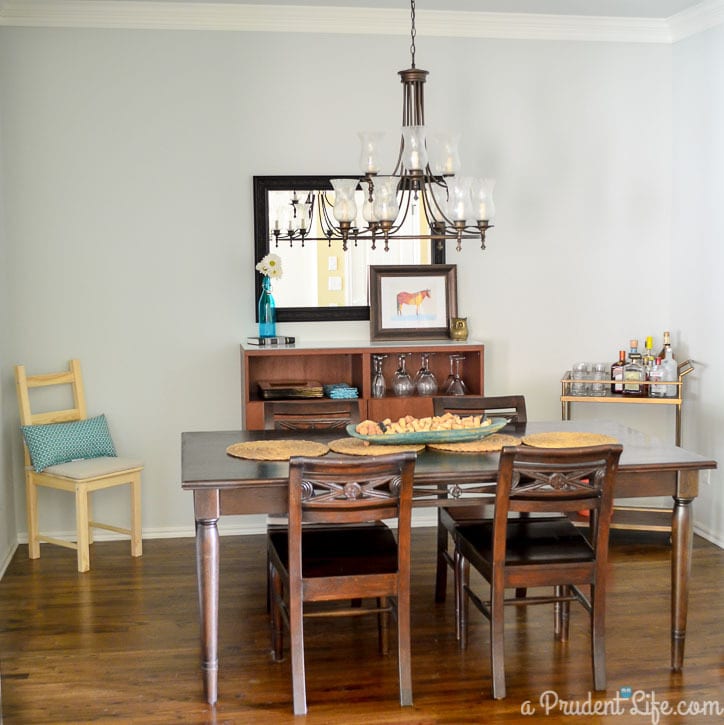 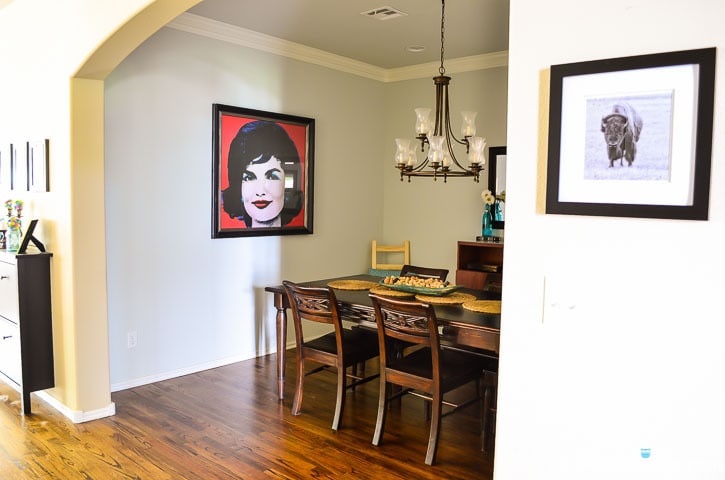 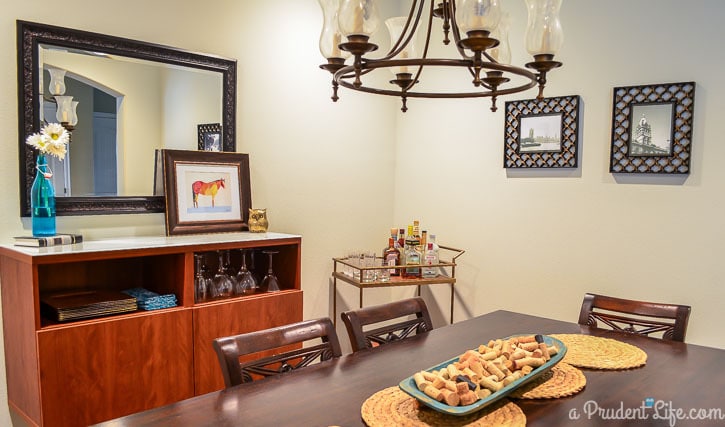 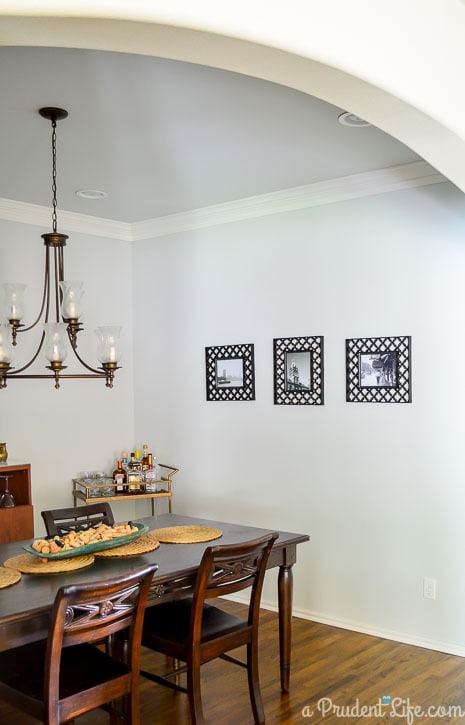 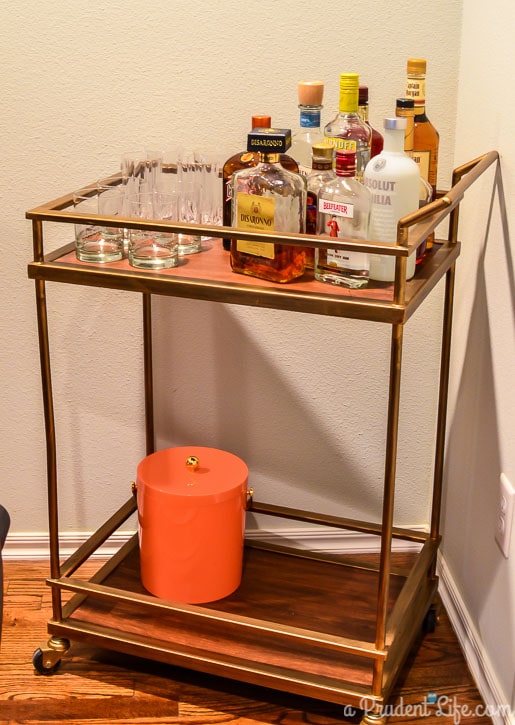 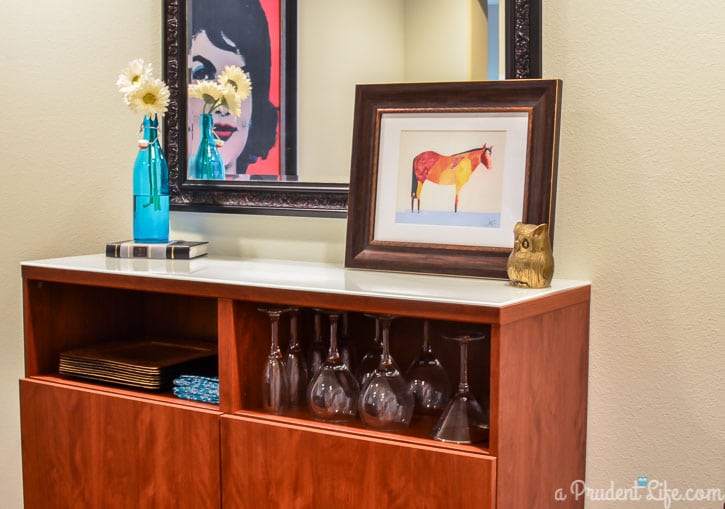 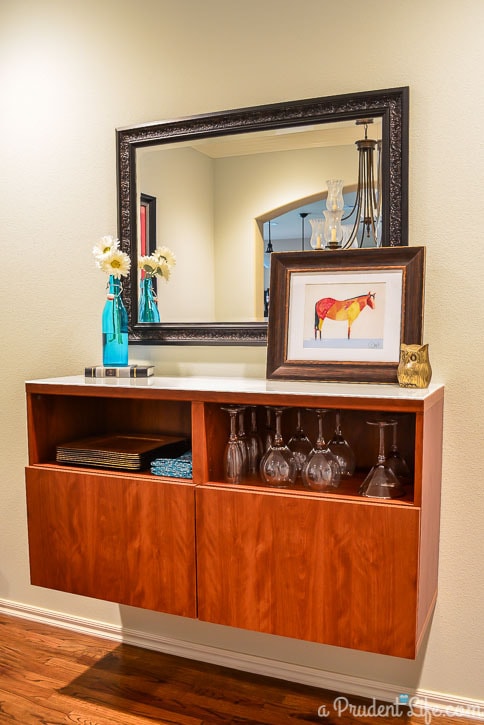 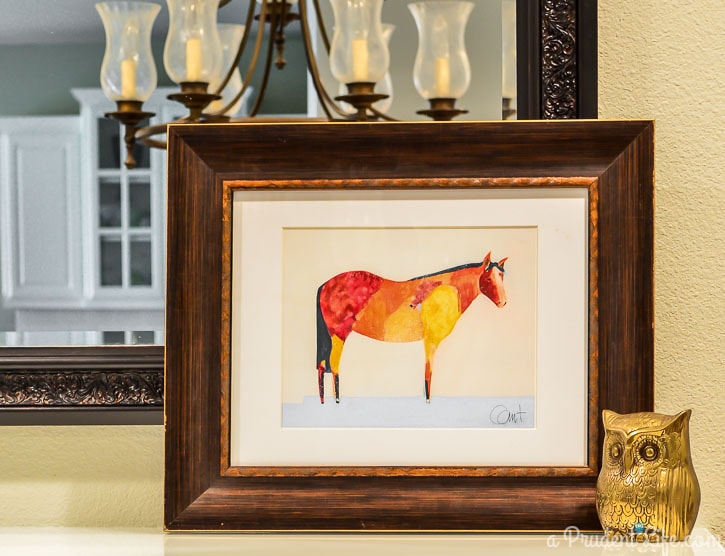 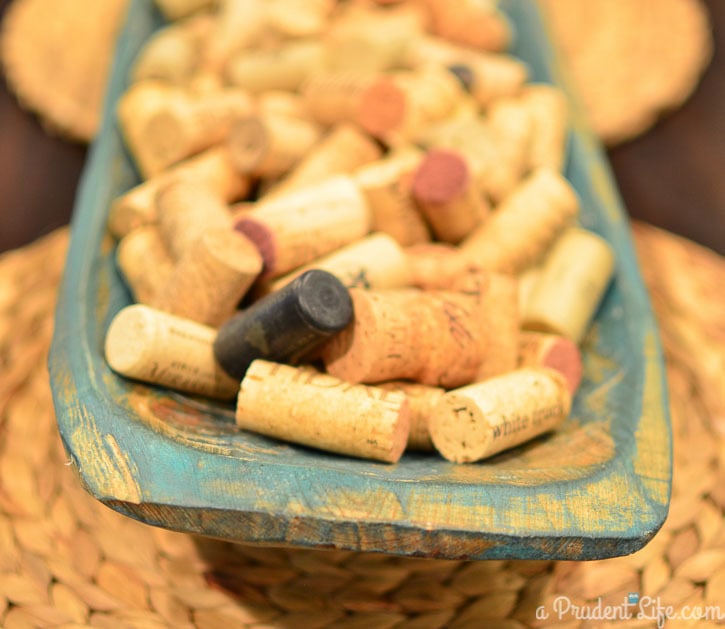 Some of you wondered what we were going to do with the giant Jackie when you noticed her missing from our office makeover before & afters. Once we installed the new console, we realized Jackie would work great in the dining room since the BESTA series is more modern that most of our furnishing and Jackie needs a swanky modern space.

In addition to bringing Jackie in, I painted the silver mirror black and added a few accessories we had picked up in thrift/antique stores lately. The bar cart was added in the spring after months of stalking it at Target waiting for it to go on clearance.  I also re-framed some photos with clearance frames from Hobby Lobby for the right side wall.

Oh yeah, the color of the console in the photos is Medium Brown. They also come in white & BLACK-BROWN, which is what we intended to buy. In our defense, the aisle we were in had about two million boxes labeled either white or brown. I can’t tell you how many times we checked every box to make sure it said brown and not white. So tricky that there must have been another aisle with the darker brown!

For a room makeover that started with a BIG box picking mistake at IKEA, I am in love with the way it turned out. 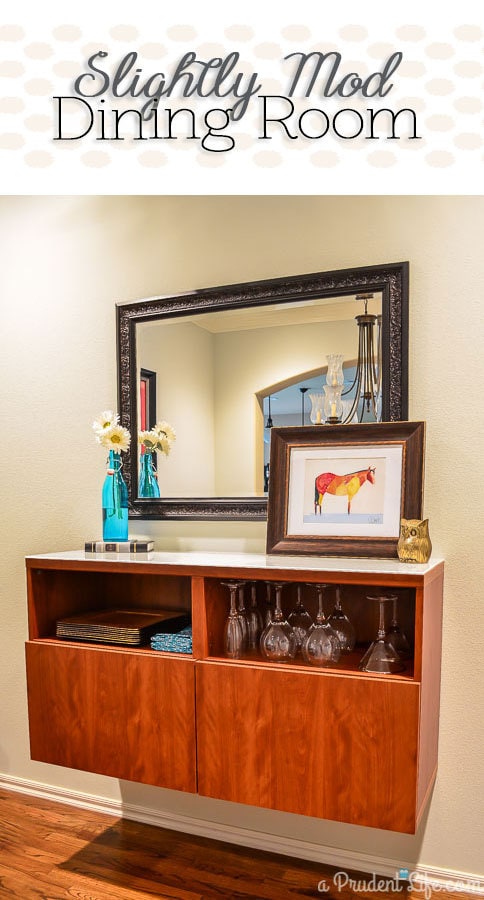 If you love room reveals, make sure you check out the kitchen tour!

Post linked up at: Take a Look Tuesday, DIY’ers, Do Tell Tuesday, The Makers, Whimsy Wednesday, Hit Me With Your Best Shot, Inspiration Gallery, The Pin Junkie, Craft Frenzy Friday, Remodelaholic, Work It Wednesday, Link It or Lump It, Thrifty Decor Chick 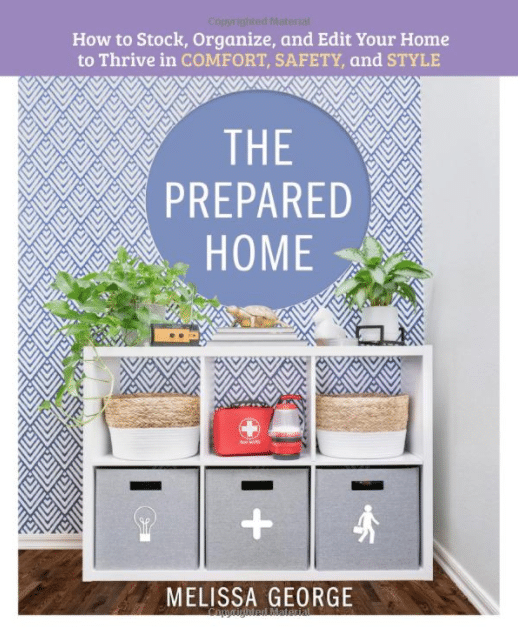 BIG NEWS! It’s hard to believe this is real, but my book, The Prepared Home, can be ordered now! The book truly is a culmination of things I’ve learned in different parts of my life. Before I wrote about organizing and decorating, I worked as a project specialist for a hospital. Over the years, one of the projects I ... END_OF_DOCUMENT_TOKEN_TO_BE_REPLACED

While I love solving issues around our house, I like helping others even more. In a recent newsletter, I asked readers to share the biggest struggles around their home. While all the responses were great, one of them instantly stood out because it was such a relatable question. It's something that I struggle with myself. ... END_OF_DOCUMENT_TOKEN_TO_BE_REPLACED 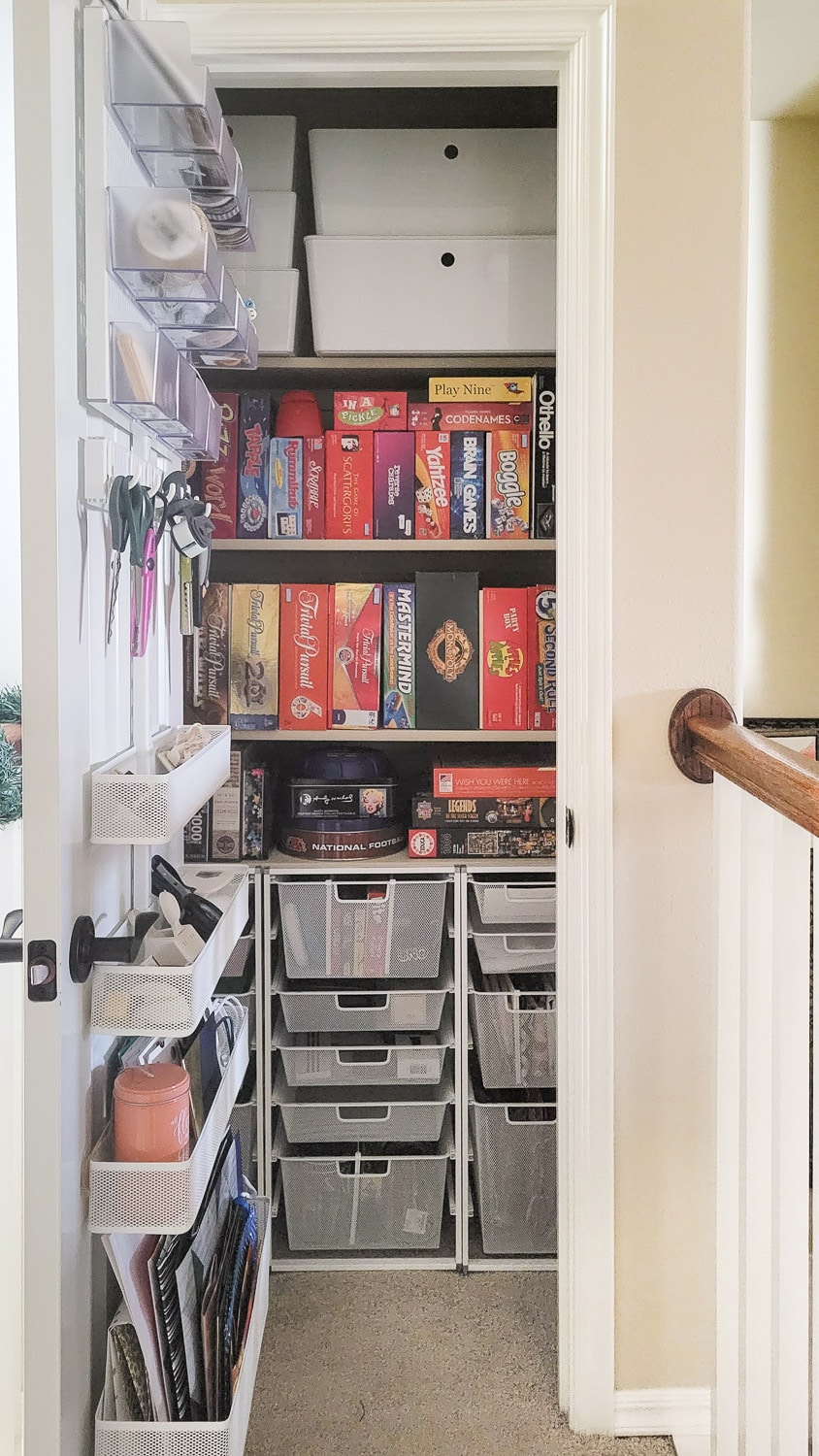 I'm thrilled to share our game closet makeover with you today! It's been a while since I've done a big closet organization project, and for good reason. All the downstairs closets, like our master bedroom closet, bathroom closet, office closet, and entry hall turned cleaning closet were all finished and still working well. ... END_OF_DOCUMENT_TOKEN_TO_BE_REPLACED 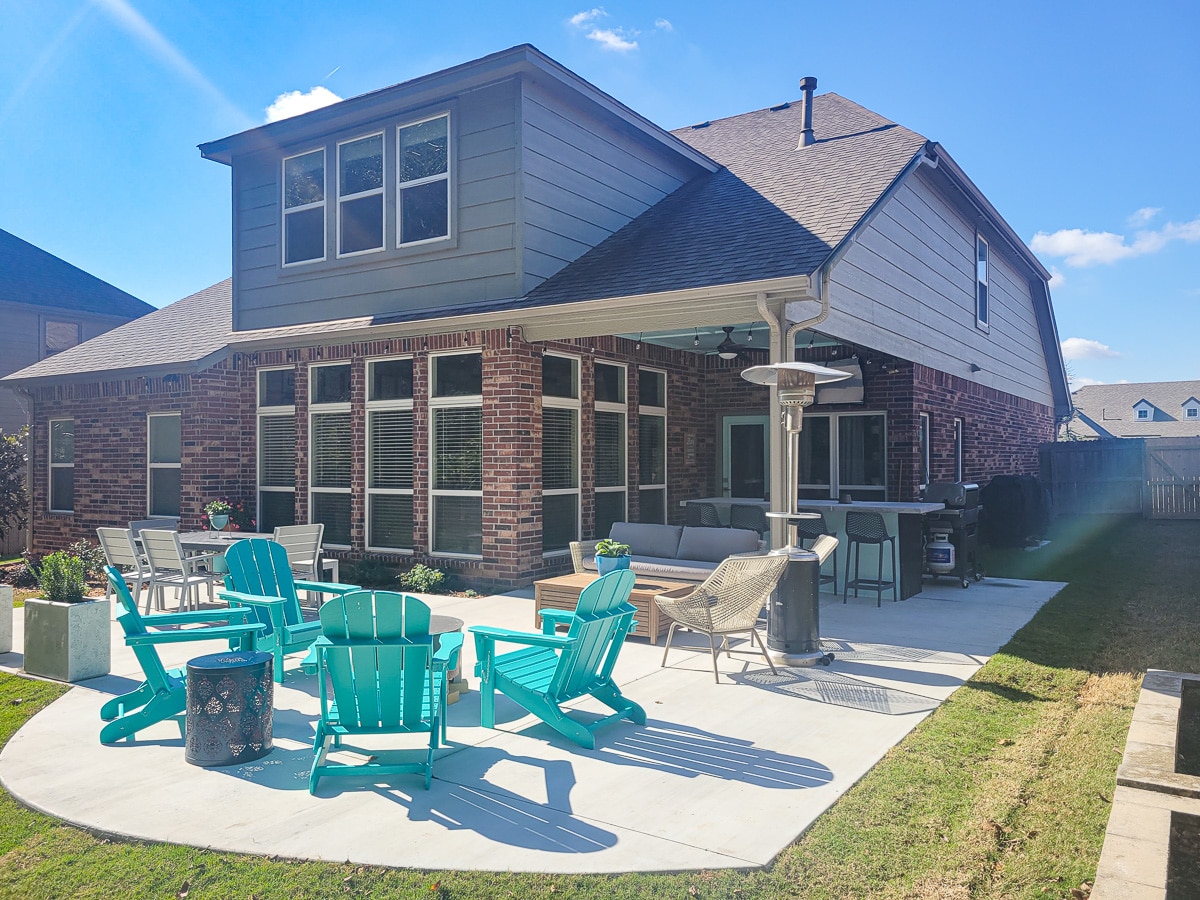 There have been a lot of projects that we've been VERY relieved to finish, like the master closet, but the backyard tops the list! It's been a 6-month process, which was mostly waiting on the first landscaper. When we hit two months past his original estimate, we moved on to another company and things finally got moving. ... END_OF_DOCUMENT_TOKEN_TO_BE_REPLACED

A couple of years ago, we switched from using a spice cabinet to storing spices in a kitchen drawer next to the stove. While having a spice drawer has been the perfect solution for us, I know it won't work in every kitchen space. I've seen some other spice storage ideas that provide easy access in a variety of kitchen ... END_OF_DOCUMENT_TOKEN_TO_BE_REPLACED 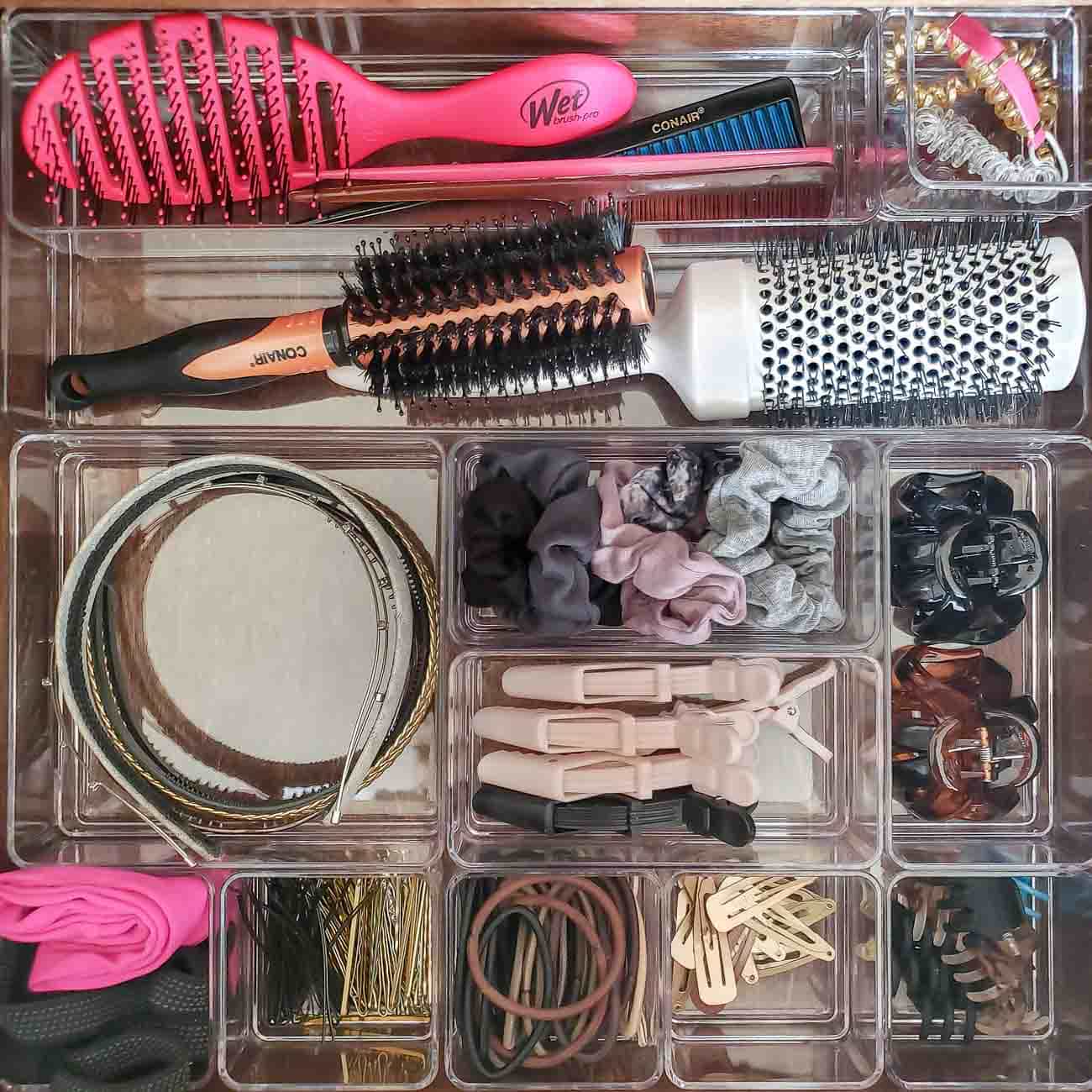 Over the years, I've narrowed down the best home organization products through a lot of trial and error. Last month, I sent a box of clear drawer organizers back because I strayed from my favorites to see if something cheaper would work. Unfortunately, the less expensive versions were so thin and brittle that several were ... END_OF_DOCUMENT_TOKEN_TO_BE_REPLACED 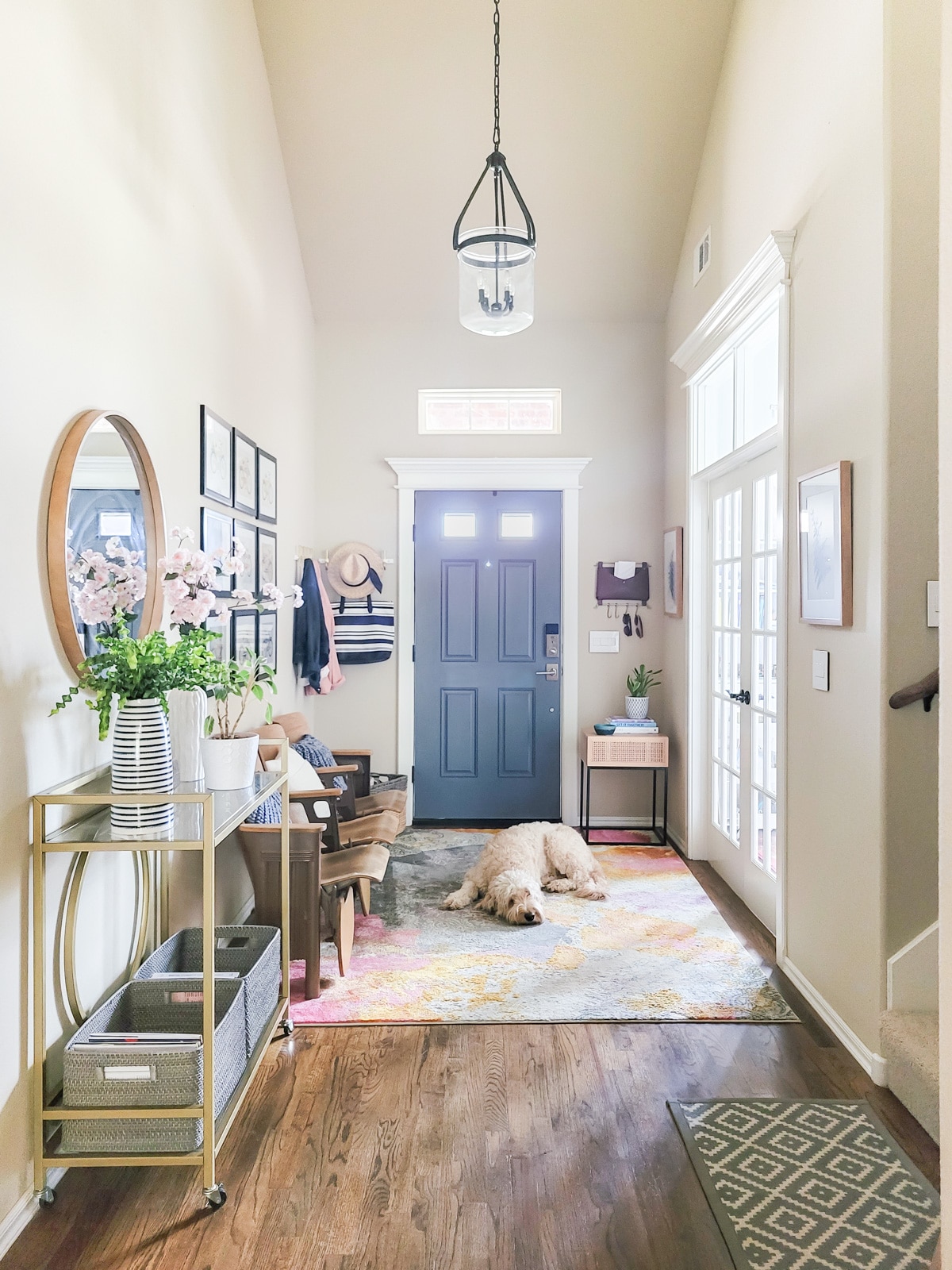 Product links in this post may be affiliate links. We made a couple of minor organizing and decorating updates to the entryway that I thought you might like to see this week. Hopefully, as I talk through them, they’ll inspire some helpful changes in your home!Let’s start with the theoretical before photo of what the ... END_OF_DOCUMENT_TOKEN_TO_BE_REPLACED 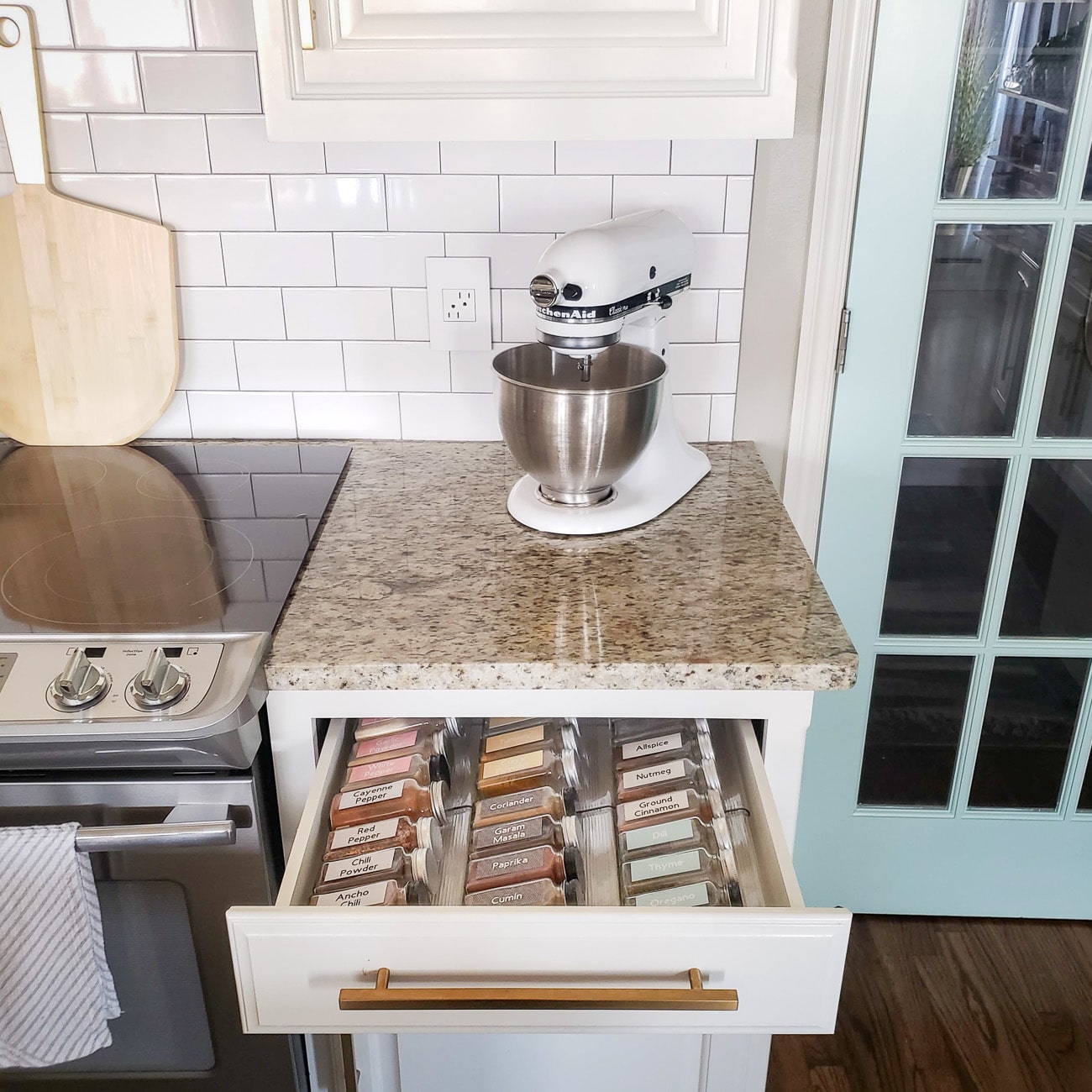 Adding a fall clean up routine to your year is a great way to get the house ready for the holidays with less stress! Spring cleaning gets all the attention, but I don’t know anyone that has time to declutter, organize, and deep clean their entire home each spring. The more I thought about it, the more I realized that ... END_OF_DOCUMENT_TOKEN_TO_BE_REPLACED 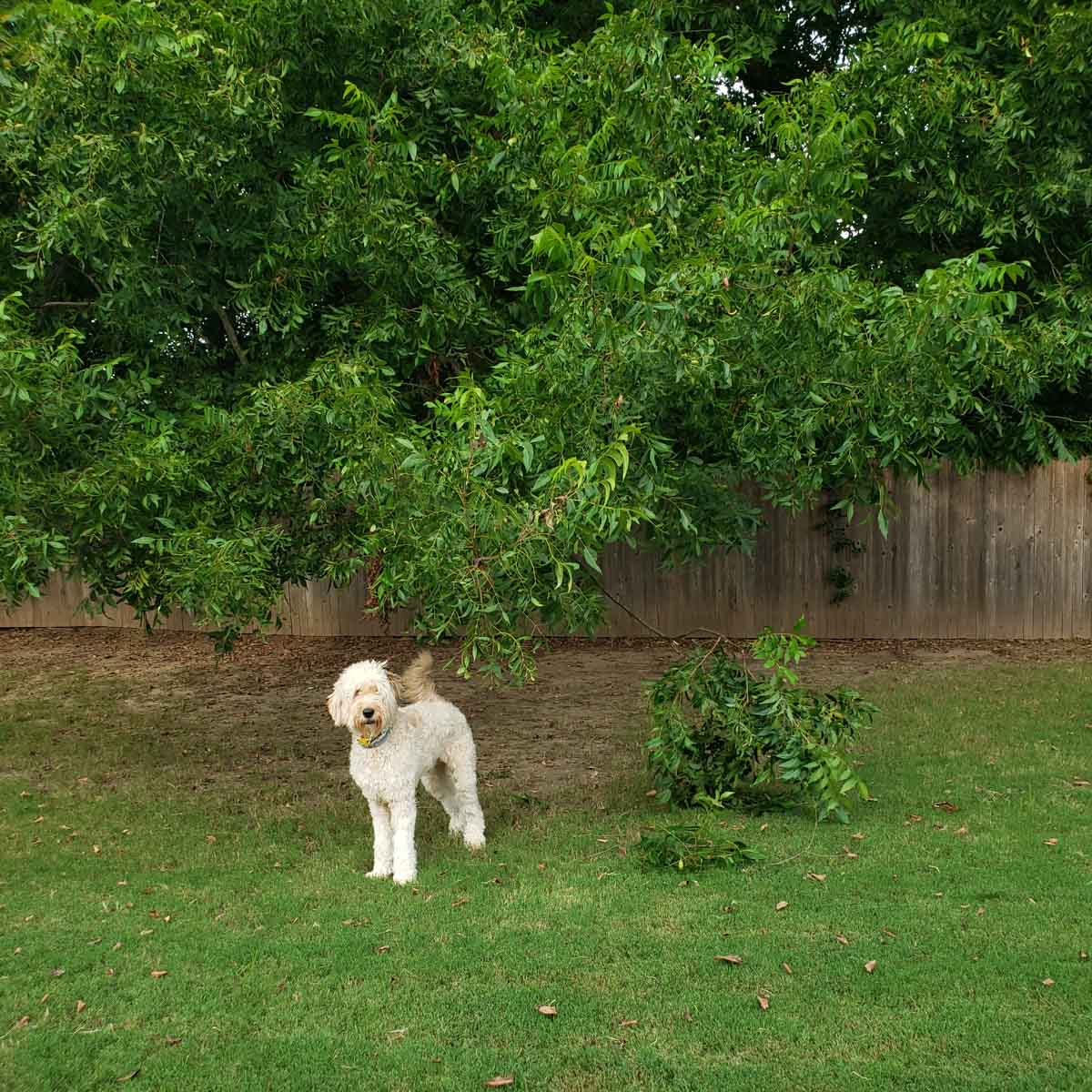 It's been a while since we've tackled a big project around the house, but I think the next one will be worth the wait. Ten years ago, when we picked out our lot to build on, we paid a premium for a larger backyard. While it was worth the price, we still haven't optimized the space for ourselves or for entertaining. Our ... END_OF_DOCUMENT_TOKEN_TO_BE_REPLACED 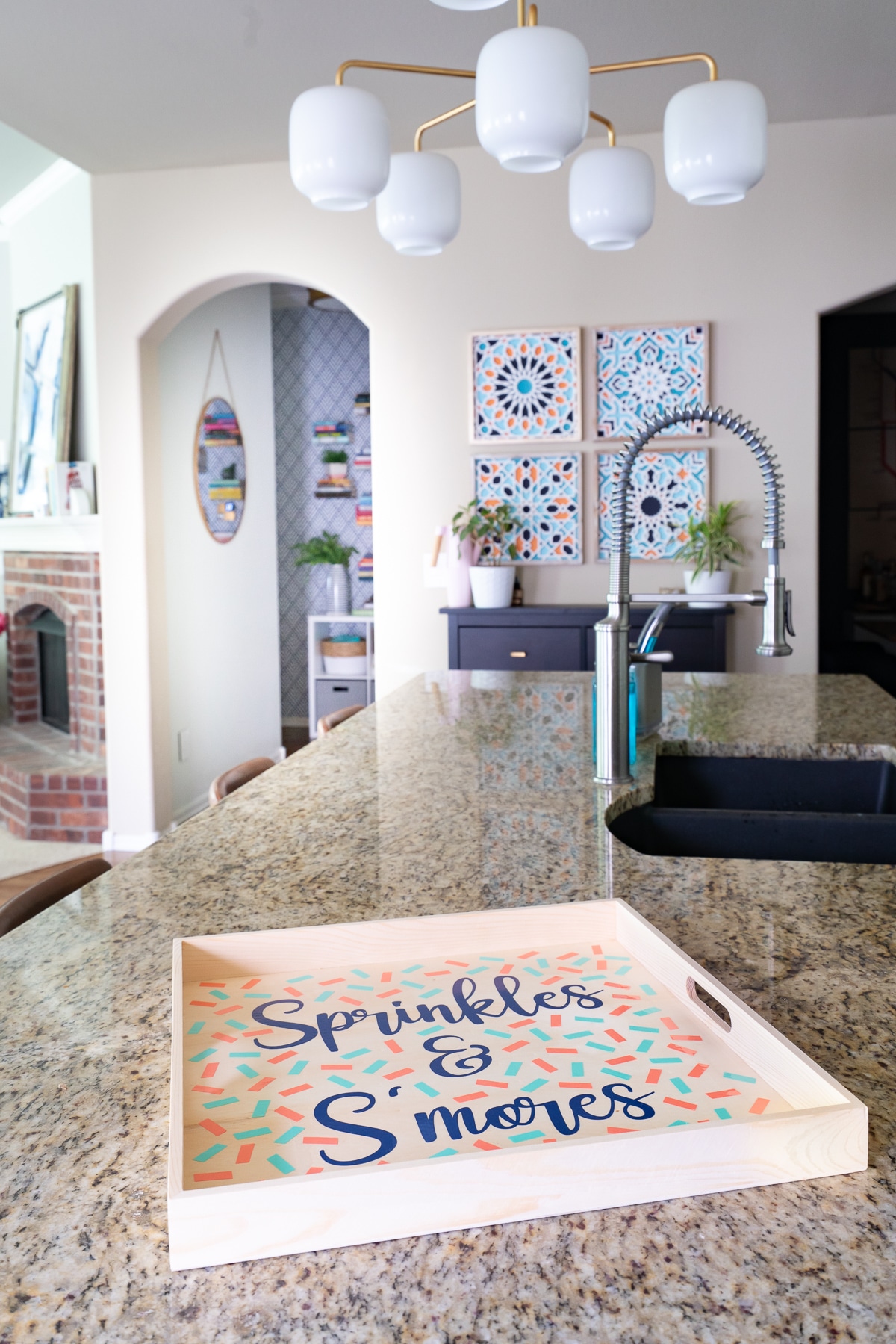 Each season, I love to add a little something to freshen up our home décor. At the same time, not being intentional with those minor additions can turn into major clutter over the years. Now, I try to stick with decor that adds function or has personal meaning. In today's new post, I'll show you how I updated a simple wood ... END_OF_DOCUMENT_TOKEN_TO_BE_REPLACED 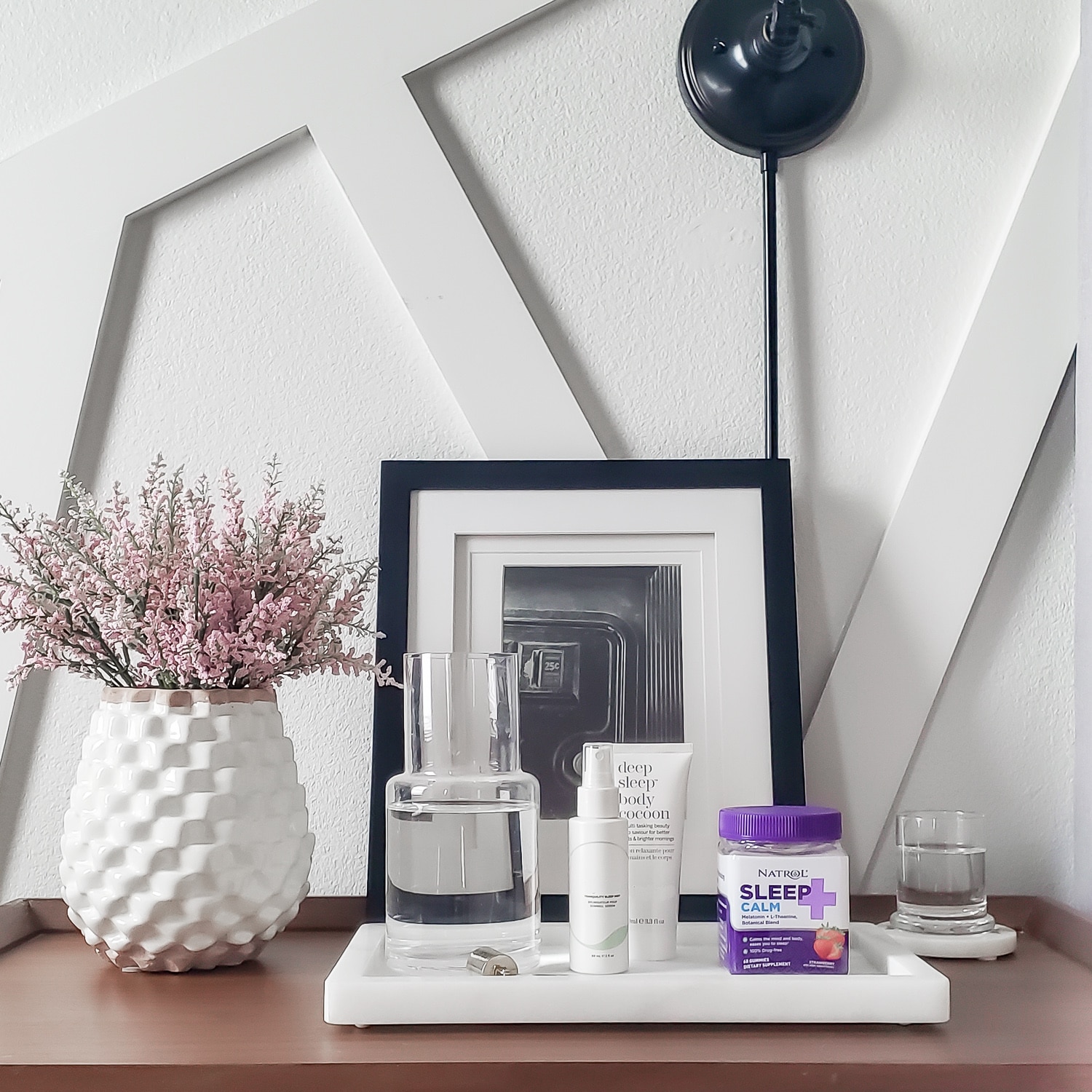 This post is sponsored by Natrol®, but the content and opinions expressed here are my own. I’m the first to admit that I’m not a joy to be around the next day if I don’t get a good night’s sleep. Not getting enough sleep multiple nights in a row leads me to feeling physically ill and completely non-productive, so I have ... END_OF_DOCUMENT_TOKEN_TO_BE_REPLACED 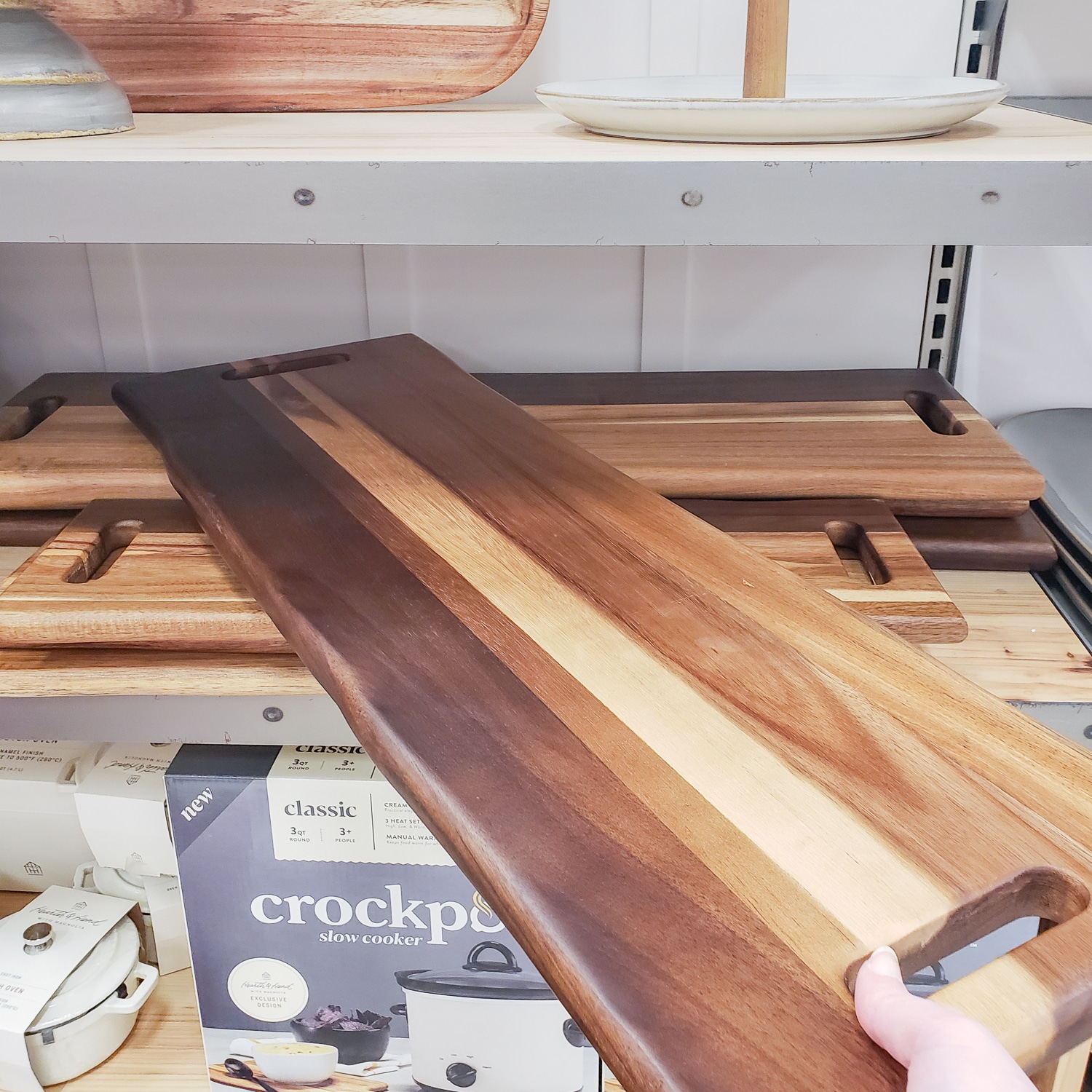 In the past, I've written about different techniques for dealing with clutter in your home, like the root cause worksheet that helps things STAY decluttered. But there's actually a very important step before anything we've talked about before. Shopping. More specifically, our shopping habits have a huge impact on ... END_OF_DOCUMENT_TOKEN_TO_BE_REPLACED 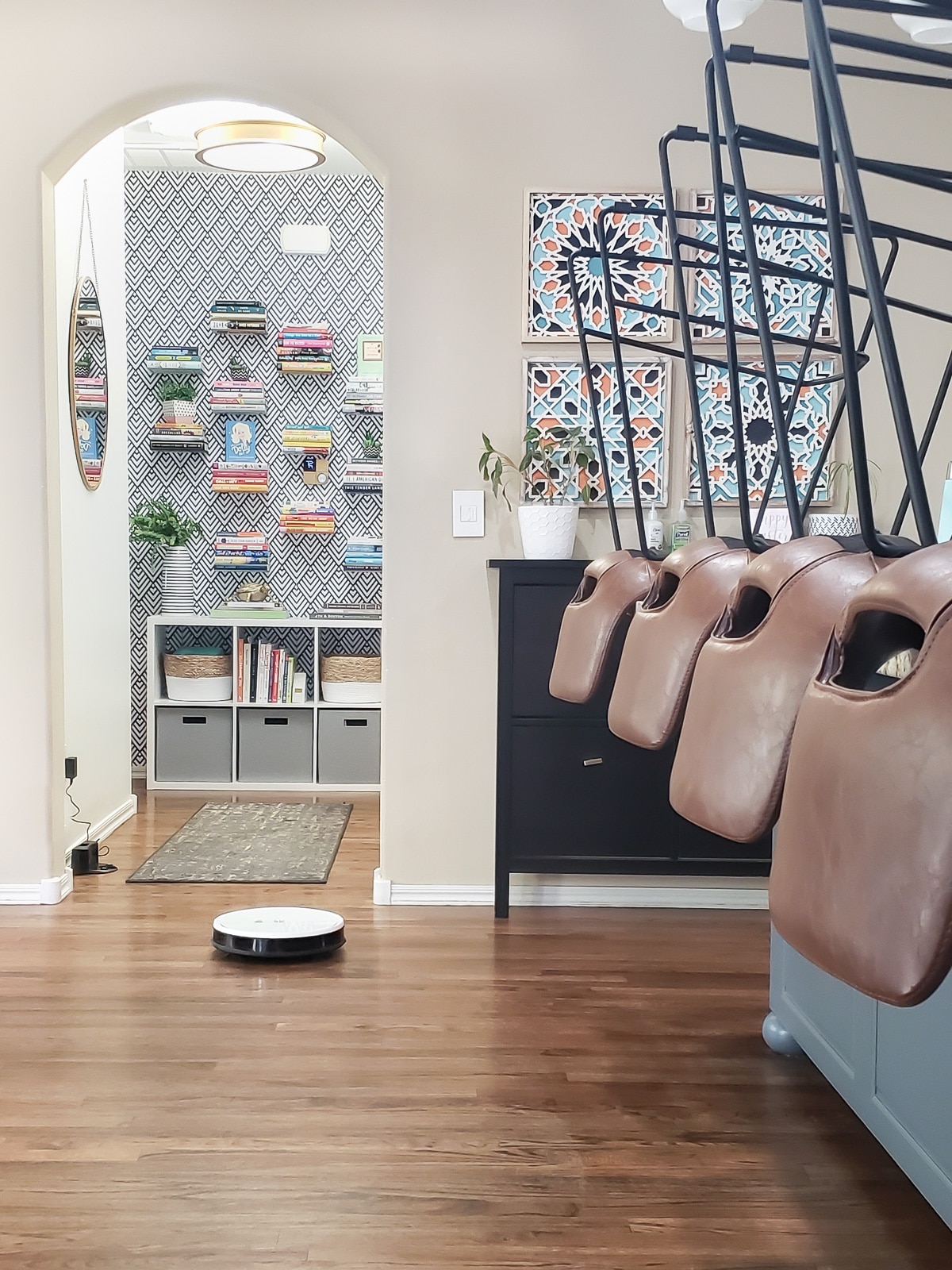 It's no secret that I'm always looking for ways to make cleaning quicker or easier so I can spend more time doing things I enjoy. You'd think I would have been an early adopter to robot vacuums, but instead, I've been holding out for years, letting the technology improve and hoping for prices to drop.Well, it finally ... END_OF_DOCUMENT_TOKEN_TO_BE_REPLACED 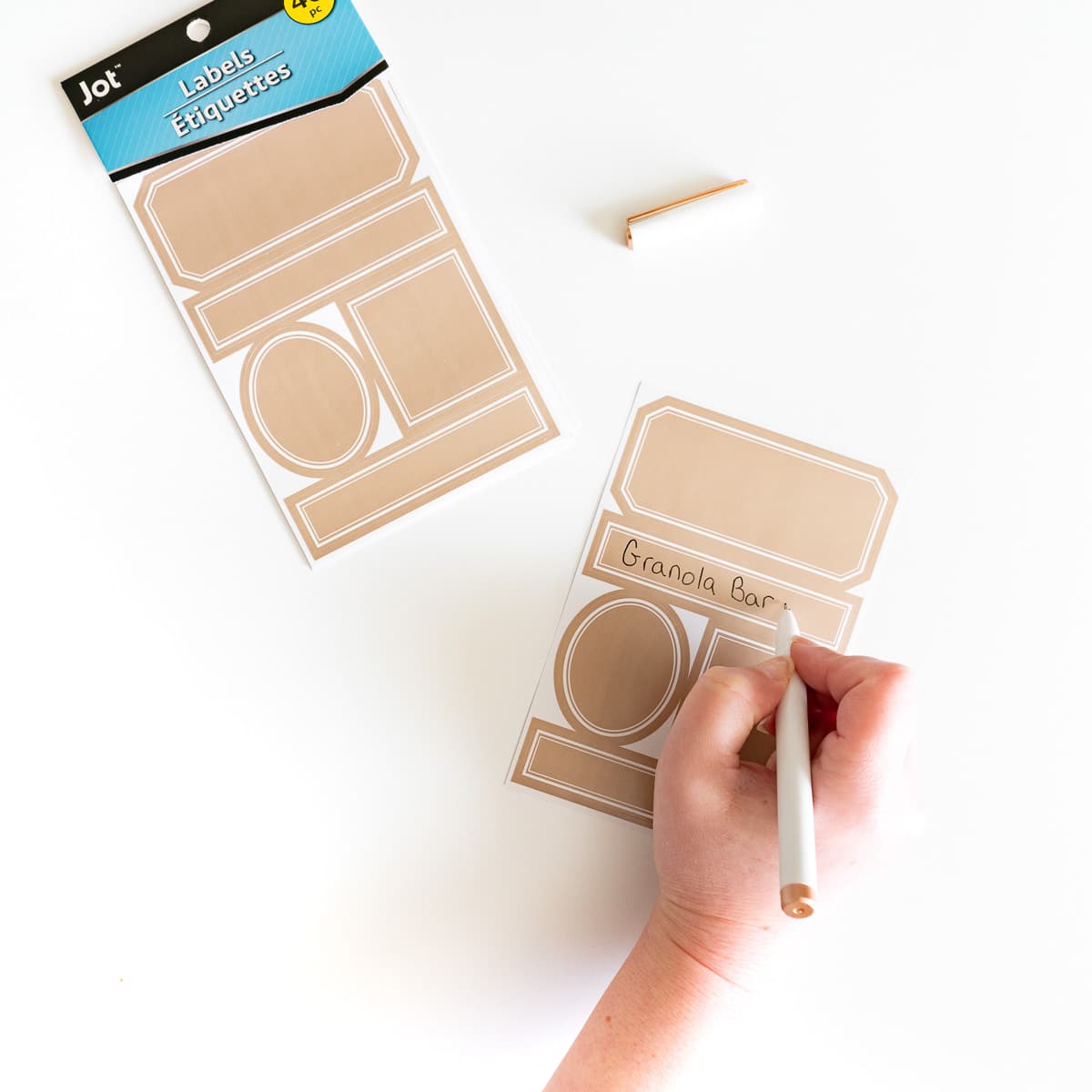 One of the most important, but often overlooked, parts of my home organization process is labeling your storage containers, bins, or totes. I talk about this step in every organizing project I do because it's the key to keeping things tidy long-term. In the past, I've shared my favorite labeling tutorials using my ... END_OF_DOCUMENT_TOKEN_TO_BE_REPLACED 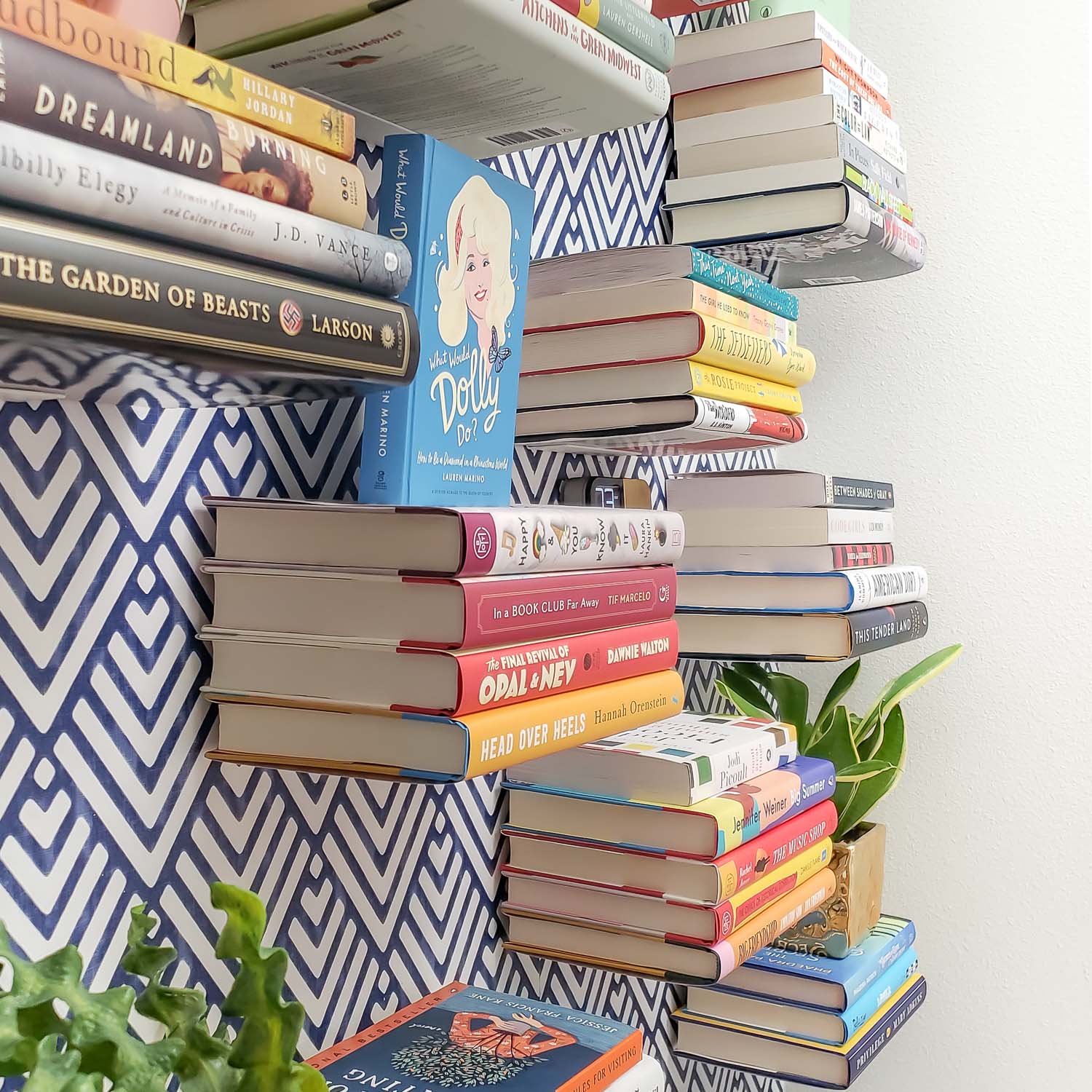 If you're short on storage space for books or just looking for a wall to display your books in style, I've got a quick and affordable tutorial for you today! I fall into the camp of people that love having my own library of books at home. However, our living room floor plan doesn't allow space for bookcases without giving ... END_OF_DOCUMENT_TOKEN_TO_BE_REPLACED 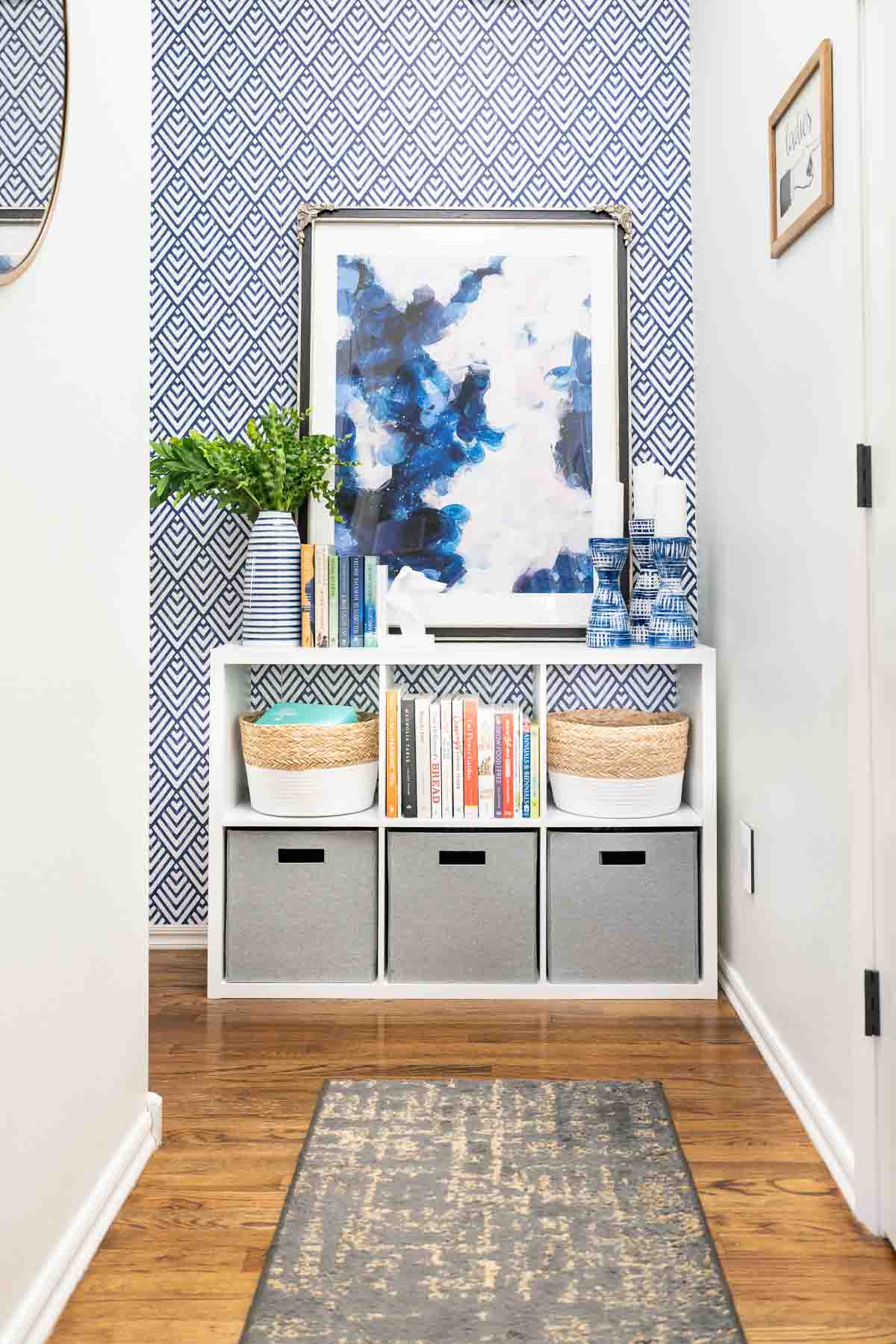 We recently tucked a new white 6 cube organizer into the hallway between our kitchen and master bedroom. It's become the perfect storage solution for some of our household clutter. You know, those annoying items that are necessary, but don't have a logical home in the house. In addition to the function, it's been a fun new ... END_OF_DOCUMENT_TOKEN_TO_BE_REPLACED