As I promised in the garage makeover reveal, I’m sharing the full tutorial of how we hacked IKEA pieces into that awesome custom garage workbench.

Aside from being a budget-friendly option, this IKEA workbench tutorial will work for almost any size space. It’s totally customizable! 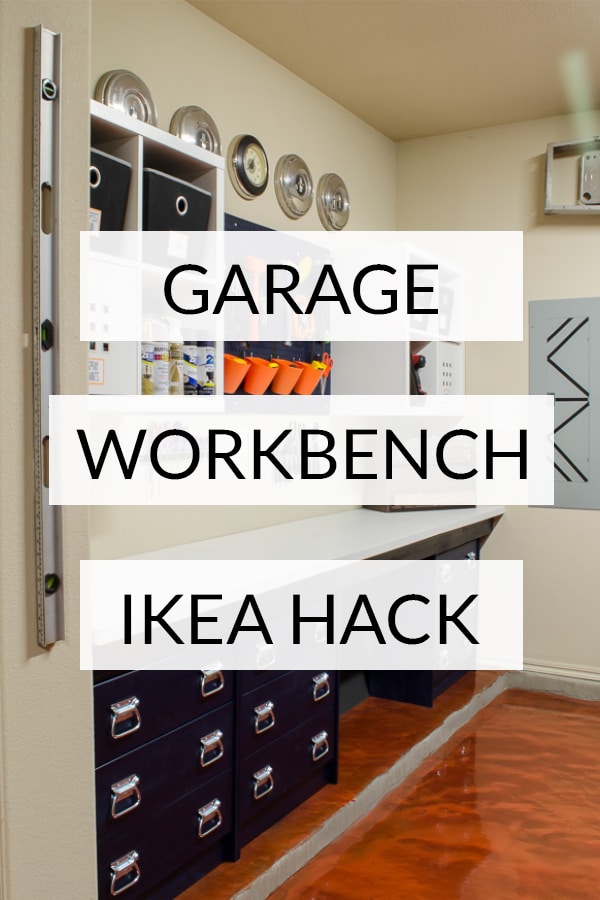 We were making over our garage on a time crunch as part of a larger challenge. We needed to design a DIY workbench that fit in a recessed area, but we didn’t have time to start from scratch.

We checked IKEA for garage storage solutions to see if they had something we could work with. While we didn’t find any garage cabinets at IKEA at the time, we did find inexpensive dressers to use for tool storage and a cheap work surface. 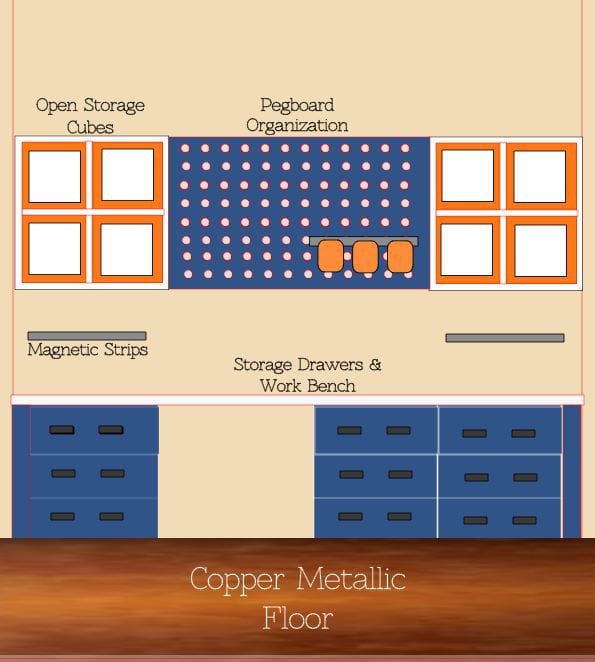 Instead of spending money buying or building a custom countertop, I bought 3 LINNMON table tops.

The depth was ideal and we would just need to cut a little length off one of them to get the perfect fit. It was a risk because I didn’t know how well they would look since they wouldn’t be a solid sheet, but they are REALLY cheap!

Above the workbench, I wanted a big pegboard so frequently used tools would be easy to access for DIY projects.

When I saw the KALLAX storage cubes in the catalog, I realized they would provide tons of storage if I hung them on the wall and used them to frame the pegboard. The cubes are HUGE and sturdy for their price.

The first step in putting the workbench together was assembling all the separate pieces I hauled home. I spent several hours with Netflix and a screwdriver. The tool, not the drink. Although in retrospect…

Once everything was assembled, I spray painted all the dressers and the pegboard in Rust-Oleum Painter’s Touch Satin Midnight Blue.

When I was talking to Rust-Oleum about the copper floor project, they were awesome enough to send me this paint as well. It’s the same paint I would have used even if I was buying it. Anytime I can spray paint something instead of brushing it, I’m all in! 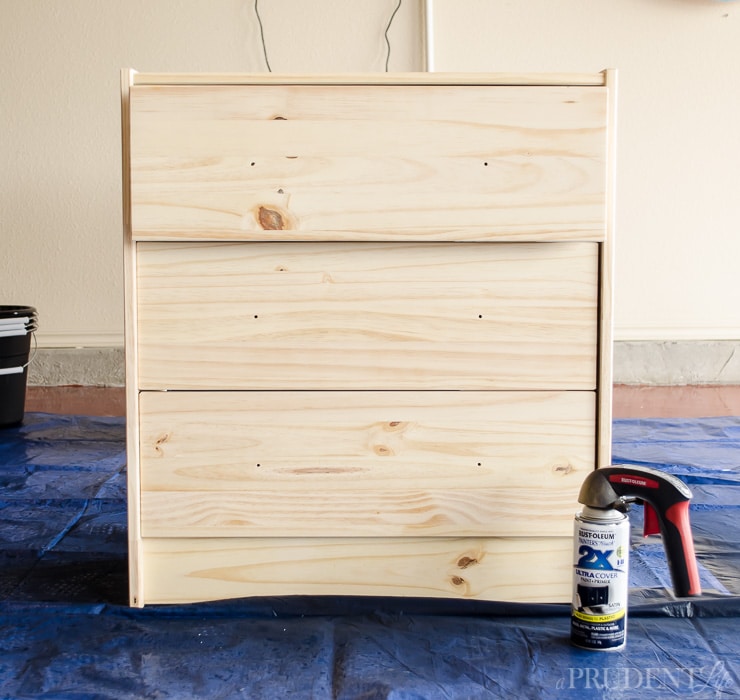 That handle on the paint was mine before this project and I LOVE LOVE LOVE it. If you EVER spray paint, you need one. It’s the Rust-Oleum Comfort Grip

(affiliate link) and you can get them on Amazon or at most hardware stores.

To paint the pegboard, I just hauled a tarp to the front yard and let all the neighbors think I was crazy. Try to pick a day that isn’t too windy. 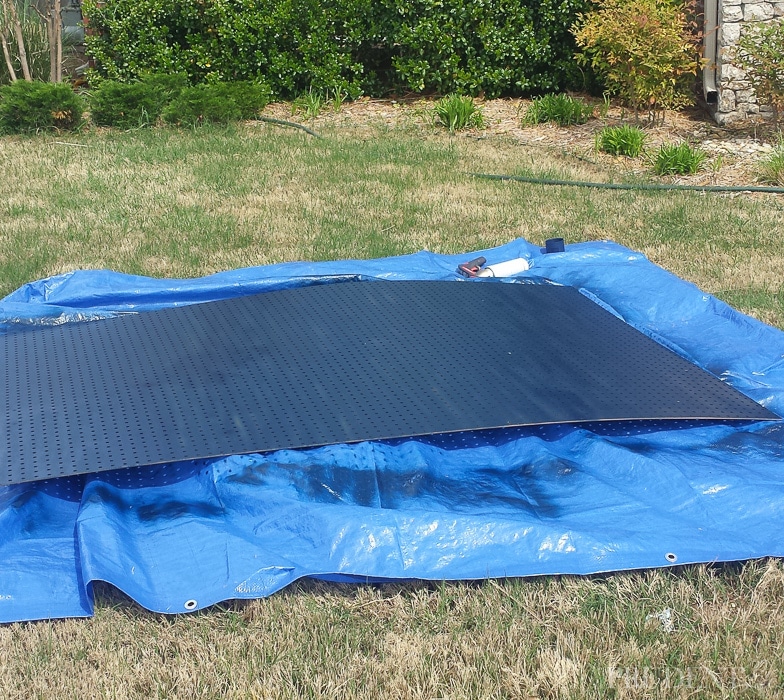 With everything assembled and painted, it was finally install day! We started with the upper KALLAX shelves. 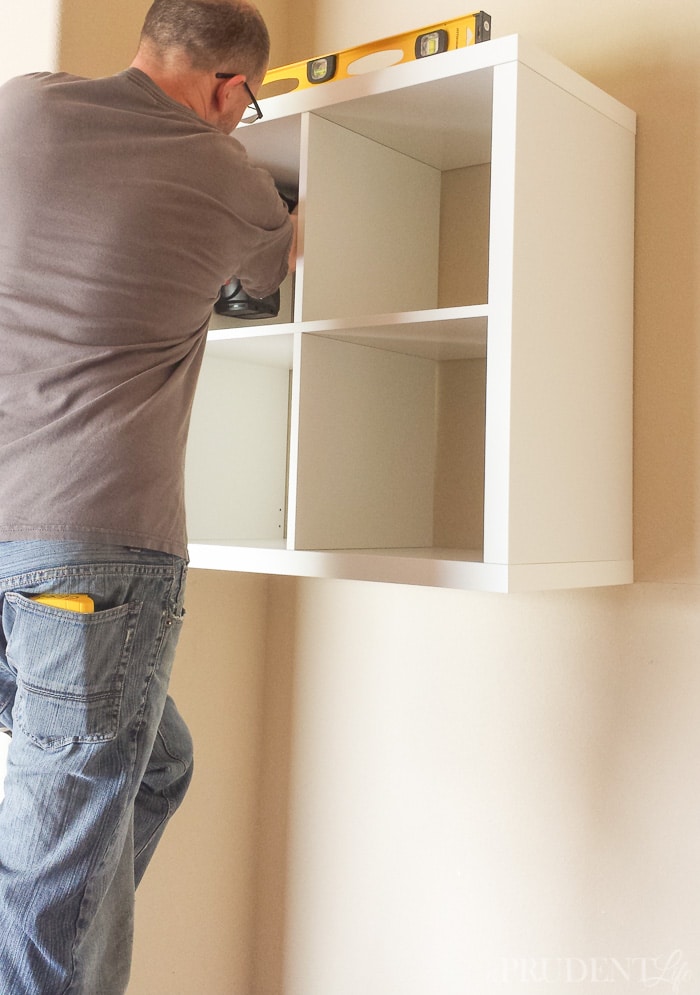 They are HEAVY when they are empty, so you’ll need some serious anchors and some strong arms. We used 265 lb toggle bolts to secure both units to the wall. 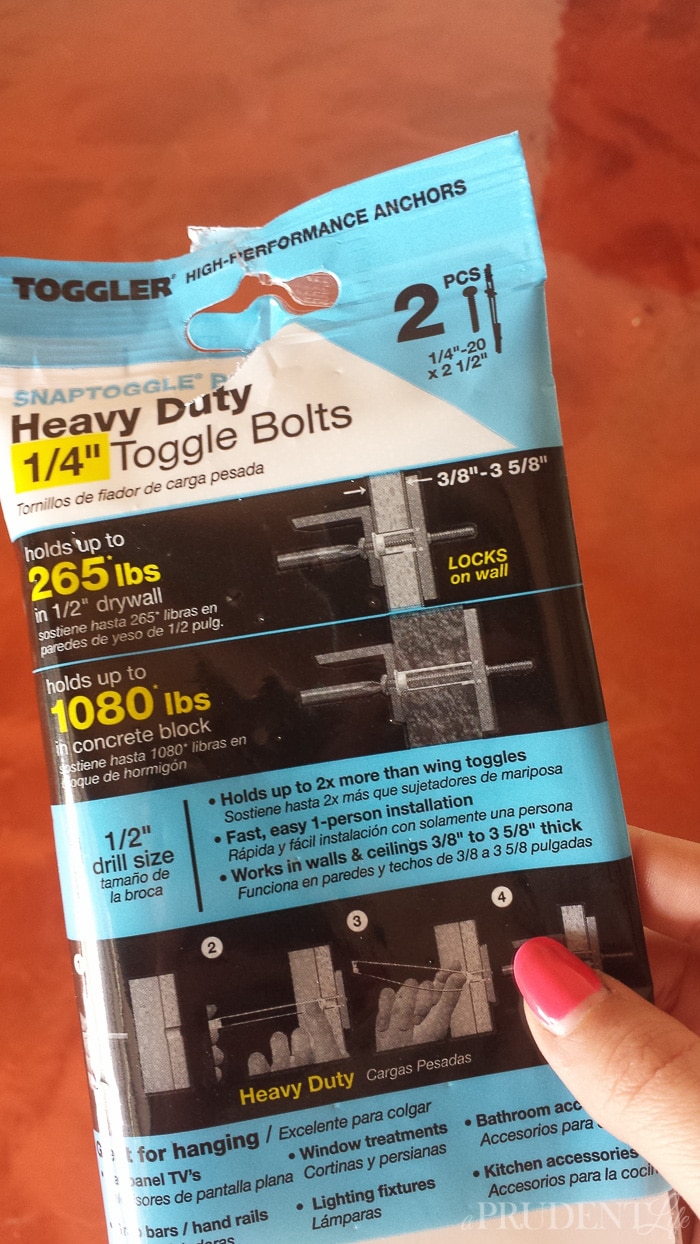 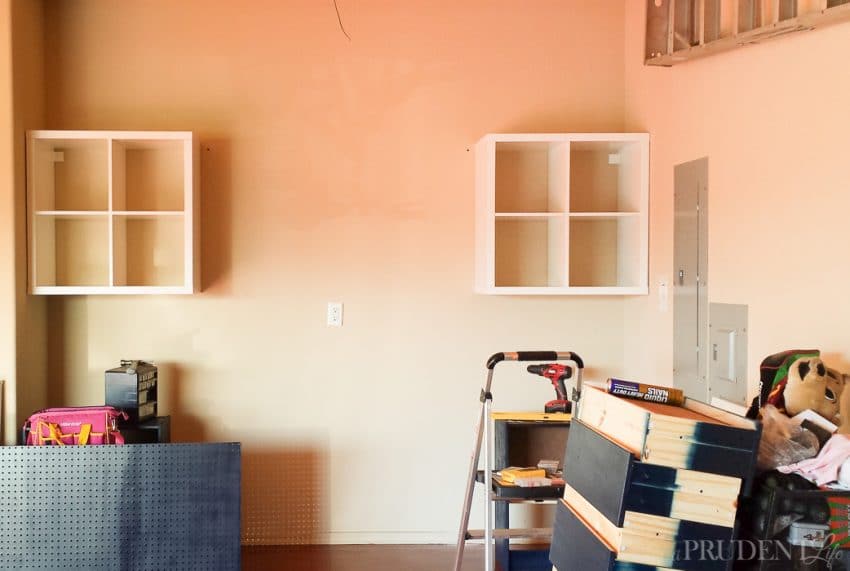 Next up was the pegboard. We measured the distance between the KALLAX shelving units and cut the pegboard to fit.

Don’t forget that you’ll need a gap behind the pegboard in order for the pegs to actually work. We used stacks of washers between the pegboard and the wall. 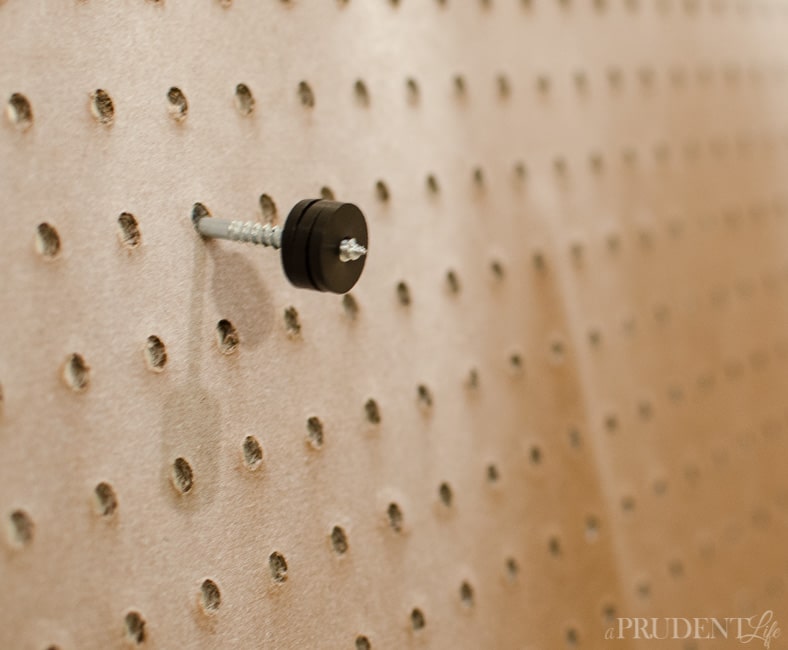 With the upper section done, it was time to tackle our IKEA garage hack!

I designed the workbench to have some  open storage space under the work area, which meant we had two dressers on the left side and one on the right side.

To add stability, we attached the right side dressers together. 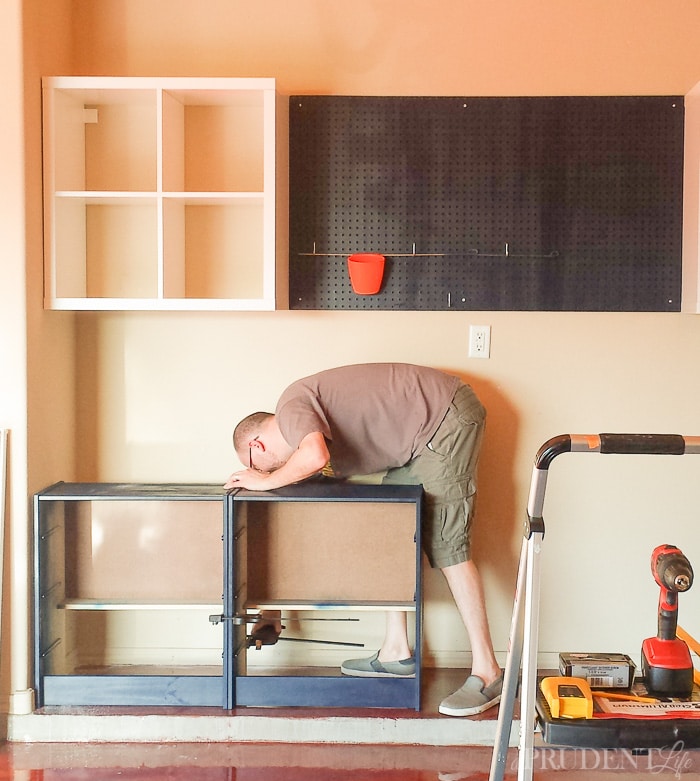 Even though our workbench was on a raised step in the garage, we still needed to add a little height to make it a comfortable work table height. Our options were either building a platform base, or adding a spacer between the dressers and the counter. Because we only needed to raise it 3-4 inches, going the spacer route was easier for us.

First, we added a 4×4 across the top in the front. 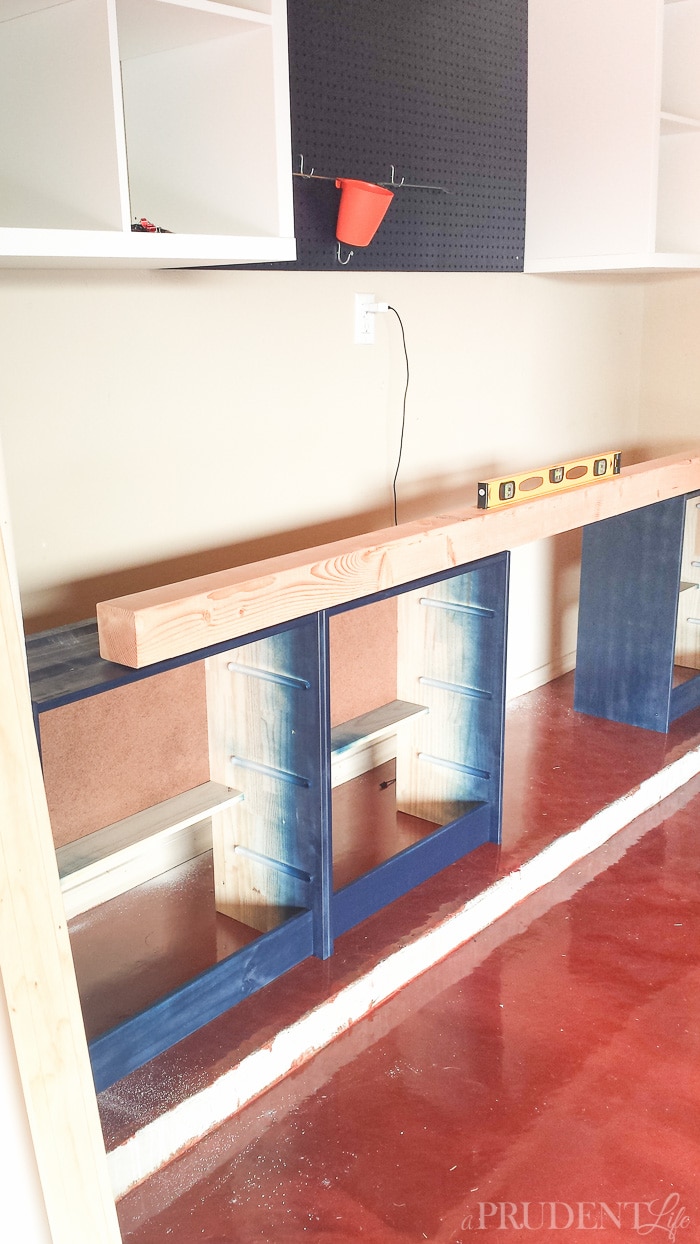 Then we created a ledge at the same height all the way around the walls. 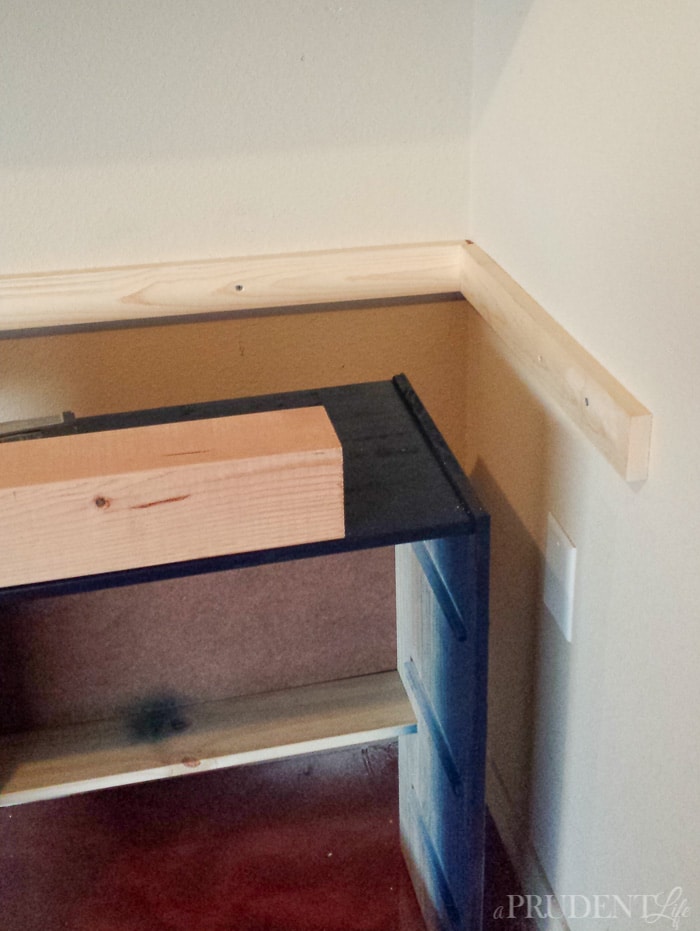 Once the ledge was screwed to the studs, we set the first two LINNMON desktops in place using Liquid Nails.

Be sure to use the level and add shims as needed.

We paid extra attention to spaces where the countertops butted up against each other to make sure they stayed flush. I was willing to sacrifice the entire surface being slightly off level if it meant the seams would be clean. 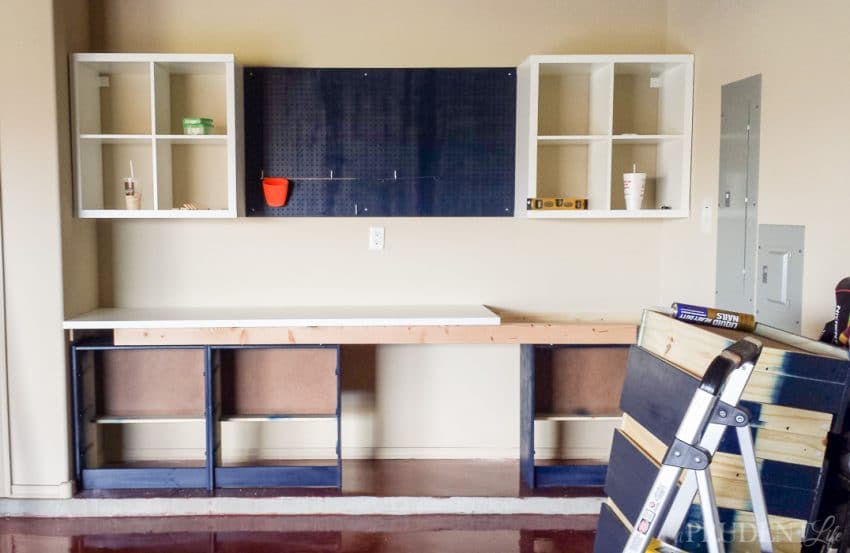 Once the first two table tops were attached, we could get a good measurement to cut the third piece to fit. To protect the surface, we applied tape before cutting with a circular saw. 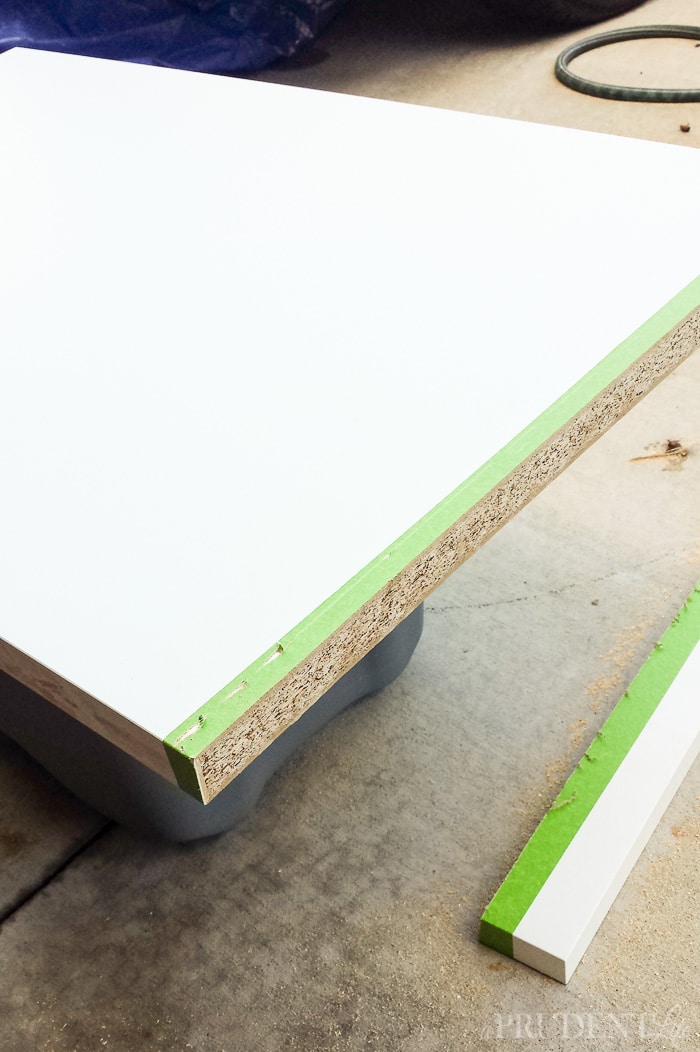 The ALMOST last step was covering up the 4×4. We used a piece of trim and attached it with more Liquid Nails and some actual nails. 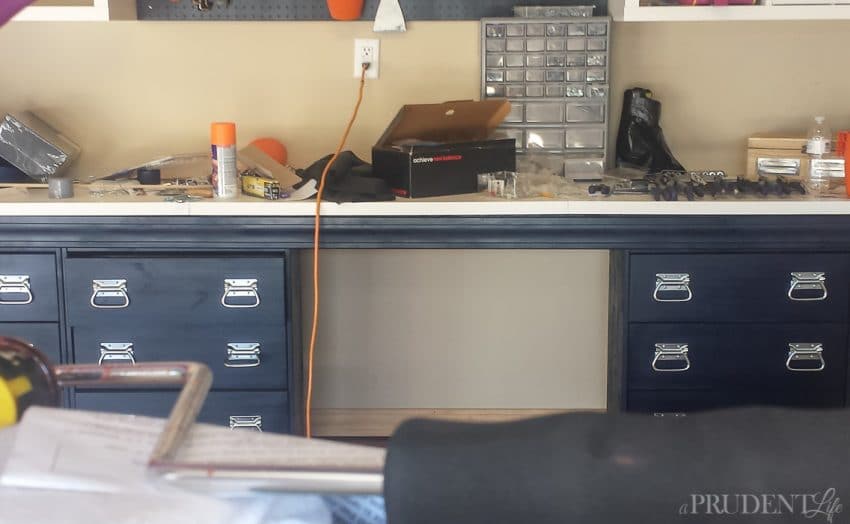 As you can see above, we added some industrial drawer pulls instead of using the little wood knobs that come with the dresser.

The pulls are available on Amazon. Just note that they do NOT come with the hardware, so you’ll need to pick that up separately. I used 1/2″ sheet metal screws and they look great.

Whew, so that’s how we did it! I know it seems like a lot, but we did the actual install in a day (not including the painting and initial assembly). 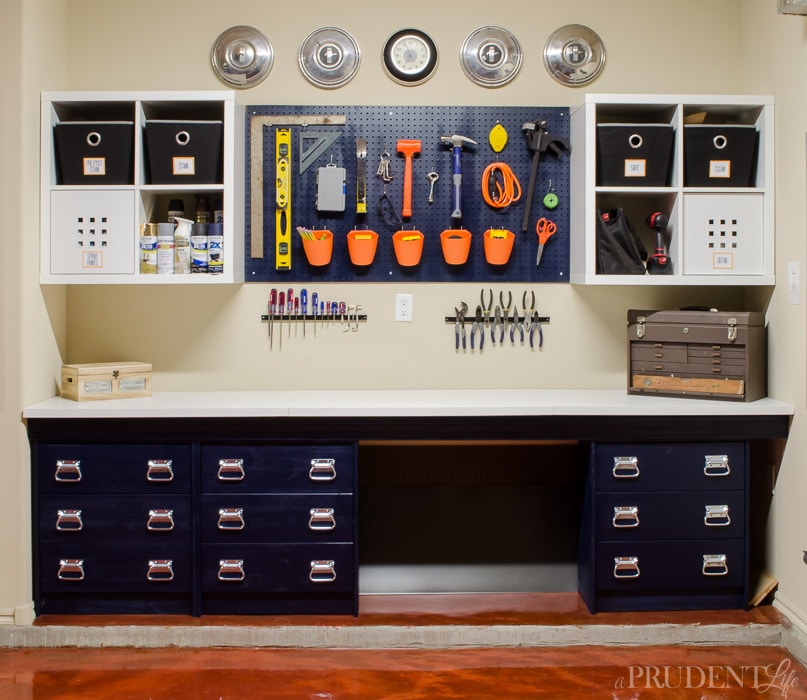 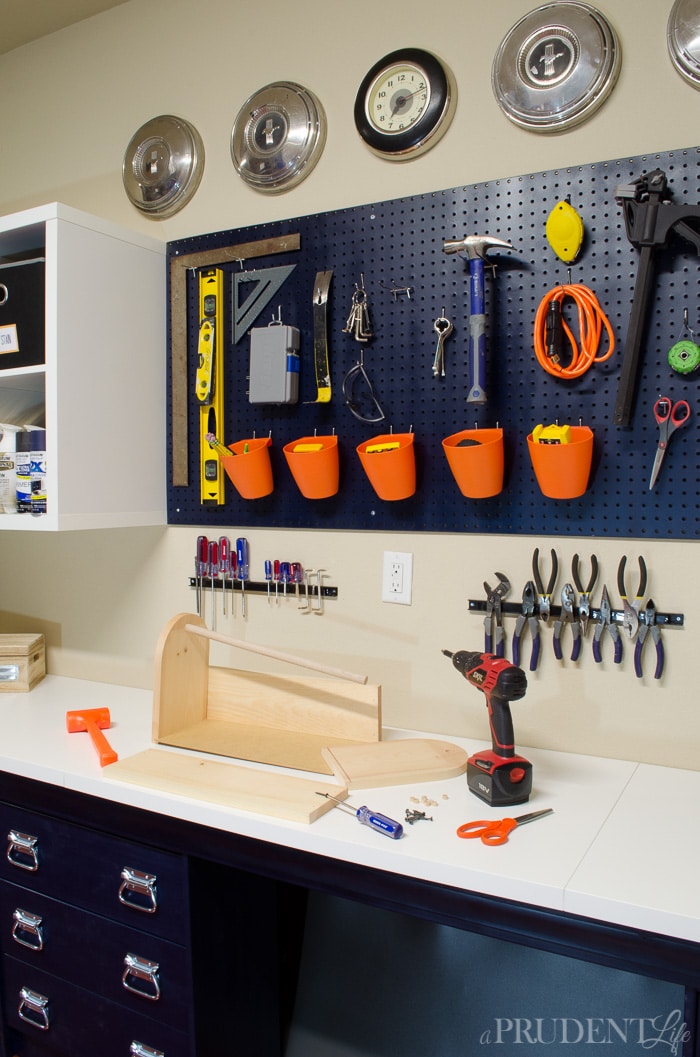 I love that anyone can adapt this plan to their own space, the width can be whatever works for you!

UPDATE: As of 2019, IKEA now sells garage storage solutions. It seems they went with a similar layout as ours, but the bottom has shelves instead of drawer storage.

If you haven’t seen the rest of the garage makeover, check it out now! And for more garage storage hacks, check out this post! 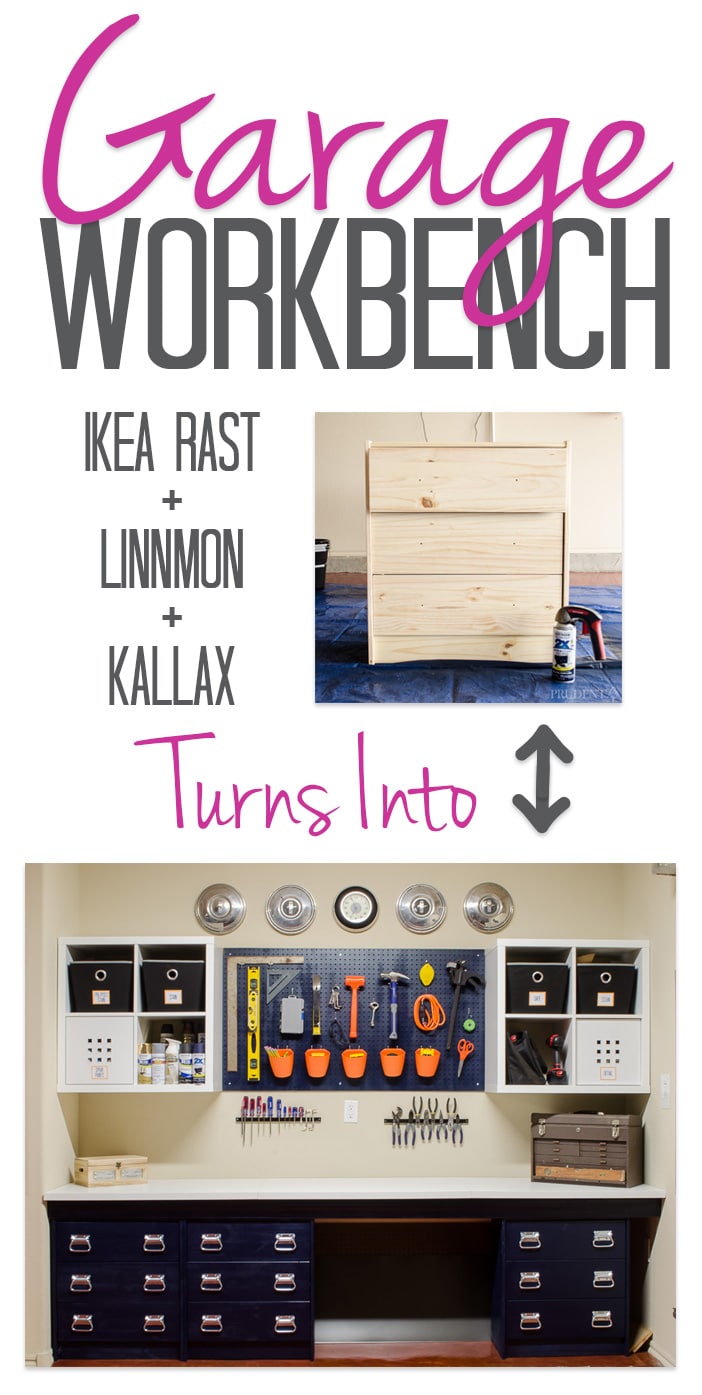 If you haven’t seen the rest of the garage makeover, check it out now!

Would you try this IKEA hack for your garage workbench?

« Summer Blankets Under $40
How to Create a Colorful Summer Centerpiece »